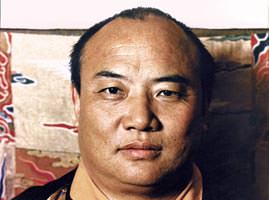 Gyalwa Karmapa is considered the first consciously reincarnated Lama of Tibet. He embodies the activity of the Buddhas and is the head of the Karma Kagyu lineage. The 16th Karmapa Rangjung Rigpe Dorje fled from the Chinese invasion of Tibet in 1959. From Rumtek in Sikim in northern India, his new residence in exile, he ensured the survival of the Karma Kagyu lineage. Hannah and Lama Ole Nydahl met him on their second trip to the Himalayas and became his first Western students.

After years of studying Buddhist teachings and meditating with him, Karmapa sent them back to the West to found centers in his name. Rangjung Rigpe Dorje was the first Karmapa to teach in the West. He died in 1981 near Chicago.

Read more about the 16th Karmapa 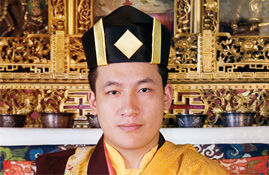 The present day Karmapa, Trinley Thaye Dorje (born in 1983) was recognized by Künzig Shamar Rinpoche as the official reincarnation. Shamar Rinpoche is the second highest teacher of the Karma Kagyü lineage and responsible for the identification of the reincarnated Karmapas. In early 1994, at the age of 11, Gyalwa Karmapa was able to leave Chinese occupied Tibet and was brought safely to India. Since then the Gyalwa Karmapa has lived in India, where he has completed his basic spiritual training under the guidance of Künzig Shamar Rinpoche. This training covered the entire Buddhist cannon of theory and practice. In 2003 he received the title of Vidyadhara, that marks the formal completion of a cloister education. At the same time he studied a normal modern education and amongst other subjects Western philosophy and several languages.

Since then he has visited his Western students and centers regularly. Conversely Buddhists from all over the world travel to the traditional ceremonies lead by the 17th Karmapa. The Karmapa feels a strong connection to the Western world and through the use of modern communication technology keeps in close contact with his students. 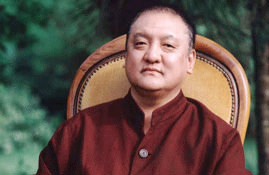 Kunzig Shamar Rinpoche is the second highest teacher of the Karma Kagyu lineage. The line of his incarnations has always been very close to the incarnations of the Karmapas. This gave him the name “Red-hat Karmapa”. In 1959 Shamar Rinpoche together with the 16th Gyalwa Karmapa had to leave his home in Tibet due to the Chinese invasion. Up until 1979 he received all the transmissions and teachings of the Karma Kagyu lineage from the 16th Karmapa. After that he travelled all over the world teaching Diamond Way Buddhism.

Thanks mainly to his efforts, the 17th reincarnation of the Karmapa, Thaye Dorje, was found in 1992 and brought to freedom in India in 1994. 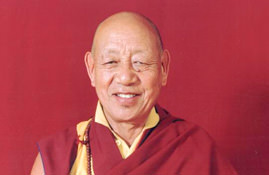 Lopon Tsechu Rinpoche was born in Buthan in 1918 where he was closely associated with the Bhutanese royal family. The 16th Gyalwa karmapa became one of his most important teachers. Due to his intense activity over several decades, Rinpoche was seen as one of the key figures in the cohesion of the different Buddhist schools in Nepal and the whole Himalayan region. Lama Ole Nydahl and Hannah met him on their first trip to the East in 1969. From 1987 onwards he regularly visited the Diamond Way centers which Hannah and Ole founded. He built 17 stupas in the West, the biggest of which is the Enlightenment Stupa near Malaga in Spain being 33m high. He also accompanied the 17th Gyalwa Karmapa on his first European visit in 2000. 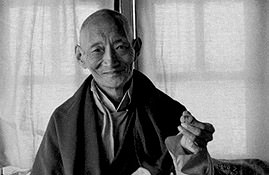 Kalu Rinpoche was born in Kham (East Tibet) in 1905. At the age of 11 he was ordinated and at 16 he started a 3 year retreat. At 25 he went into the mountains of Derge and lived there as an ascetic for 15 years. He recieved the full transmission of the Shangpa and the Karma kagyü schools. Afterwards he became a Retreat Master. Upon the request of the 16th Karmapa he left Tibet in 1955.

Hannah and Lama Ole Nydahl were sent to Kalu Rinpoche to complete their basic practices (Tib. Ngondro) at the end of the 60’s by the 16th Karmapa. They met him for the first time when Kalu Rinpoche was aged 67 and proceeded to organise his trips in the West. In 1983 they received the Rinchen Terzo transmission (Treasures of the Nyingma – transmission).

The Way Things Are

A modern introduction to Buddha's teachings by Lama Ole Nydahl.

More about the books